Notice! Your browser seems to have JavaScript disabled.
Please enable your browsers JavaScript capability to take advantage of all the functionality of this website.
Follow these instructions to enable JavaScript in your web browser 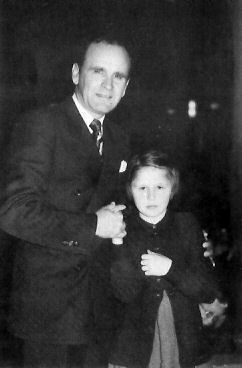 During early 1948, William Branham was taking a train journey by night through Georgia on his way to Miami, Florida when a vision broke before him of a little boy laying dead beside a road in a countryside where there were a lot of evergreens among rocks.  The boy had a strange looking haircut and great big brown eyes that had turned back.  His foot was through his long stocking and his little body was just one great big mass of broken up bones.  He was dead. An automobile was laying wrecked nearby and as Brother Branham thought, "Who is that?," the vision left.

William Branham repeated the vision from the pulpit across America. He told his audiences to write the prophecy on the flyleaf of their Bibles to see if it happened.   They were to look for a child, about eight years old, with dark brown hair, brown eyes, a funny haircut, and little short pantywaist pants. "He's going to be killed."

In April 1950, the Branham Party flew to Finland for evangelistic services. Between services, the party travelled north in three cars to Kuopio which is not far from the Arctic Circle.  They visited the Puijo Observation mountain tower from where they could see the Russian territory.  While there, Brother Branham felt the Lord drawing near and said to his campaign managers, "Something is going to happen," but could not elaborate further.

On the road down from the tower, they came upon an accident.  Some twenty minutes earlier, a car had struck two young boys. The American made Ford V-8 had been traveling about sixty miles per hour and one boy had been stuck on his side and thrown up against a tree, crushing his head and his ribs. The other boy was rolled up under the car and thrown out behind the back wheel up into the air. They had him laid out with his coat over his face.  A doctor had pronounced him to be dead and they were awaiting the arrival of his parents.  A crowd of about 500 had gathered, including businessmen and the mayor of the nearby city. Several of these men would later confirm the events in writing before notary public.

As they stopped to render assistance, Brother Branham felt an unseen hand on his shoulder persuading him to look at the second boy.  He remarked, "It seems like I have seen that boy somewhere. Let's look again." He turned back and noticed the foot protruding through the sock and recalled the boy he had seen in the vision back in America.  He turned to his managers and told them to look on the fly leaf on their Bibles.  They did so and then he exclaimed, "That's him!"  Through his interpreter, Sister May Issacson, he told the crowd, "If that little boy isn't on his feet alive in five minutes, I'll leave Finland with a sign on my back, "False Prophet."

He knelt down just the way it was shown in the vision and prayed: "Lord God, in the homeland You did speak of this vision and I know in Your great predestinated will, it's already finished. So death give back this boy's life."  The boy jumped up and began running around alive and normal with no idea what had happened.  His name was Kari Holma. When last heard of, he was a Highway Patrolman in Kuopio, Finland.

It was not until later that Brother Branham was made aware of the first little boy who had not been killed but by then, was dying in hospital.  After his parents had committed their lives to Christ, Brother Branham was given a vision showing this little boy also being restored to health and so it was fulfilled.

When Rev. Pearry Green visited the Soviet Union in November 1977, he was led by God to meet one of the six Russian soldiers who had been stationed on the Finish border who had seen Kari Holma raised from the dead.  As Brother Green moved through certain rural areas of the Soviet Union, he found there were people there who already knew the name of William Branham because they remembered that when the six soldiers had returned to their homeland, they had told everyone they could that they had witnessed the raising of the dead.

To Listen - please left click the "Listen Now" link below right
(Listening requires that your computers web browser can play .mp3 files.
Installing Apple QuickTime free software will enable this functionality)
Use your web browser Back Button to return to this page after listening.

Raising the Dead: the case of

Many outstanding miracles of healing occurred during the Branham Campaign to Scandinavia including the raising to life of  Kari Holma after his death through an automobile accident.

Hear Brother William Branham tell of these events  in his own words, to be followed by Brother Waltanin (Assistant Pastor, Helsinki, Finland) who as an eye witness, gives an impromptu and unrestrained confirmation that they happened as spoken.

The audio has been taken from William Branham's recorded sermons: 51-0728 Three Witnesses and 51-0729E The Second Miracle.  The extracts are separated by a short interlude on a Church organ.